When starting the design for this double page spread I used my sketches as my construction to build up to the final design. I started off with one large image on the left hand side of the page. After choosing the correct image I wanted to use I then went into photoshop and used some textures to mask into the text giving them a ‘naturalistic’ feeling. I exported the files as a png in order to put them in my InDesign project as the titles of the double page spread. Below are some screenshots of my process, please click on the images to enlarge them. 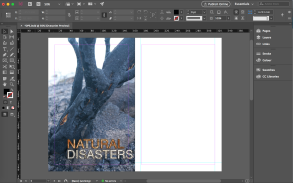 Once I had the main title page I then wanted to create synergy with the other side of the double page spread and so used the same technique with the titles for ‘Forest Fires’, again I went into photoshop and use the same masking effect. I made sure that each word had the correct texture representing it, so in this case the word ‘fires’ was “firey”. Once I had the text I wanted to have a photo in the background of the titles something to show the destruction of the forest fires as this helps with the visual communication to the audiences. 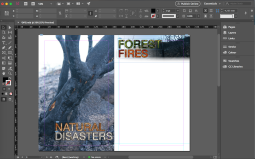 I used a gradient feather in order to make the image in the top to fade out making the page smooth flowing allowing it to transition into the typography and other photographs used.

I added in 3 images as my sketches had shown to display the destruction of forest fires and worked my typography around the imagery in a paragraph format. I made sure to use a drop cap of 4 lines as otherwise in my opinion the typography looked really boring and plain, so something needed to attracted the audiences eye. I’ve put some images below to show examples of this.

After that I just ensured that everything was aligned correctly and double checked for any spelling or grammatical errors and I was good to go, below is the image of the final product in good quality. 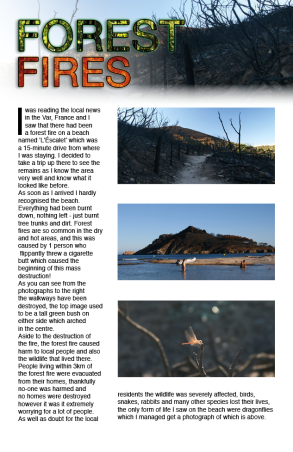 With my Monaco double page spread I wanted to ensure that I was using similar techniques to that of the natural disasters double page spread in order to create synergy between the two as the audience would recognise that they were designed by the same person (me). Therefore I implemented a similar effect of the textured typography in the titles with the ‘Monaco’ flag/ kerb for the grand prix. I used the same effect in Photoshop and exported it as a png.

I made quite a few different alternatives of the ‘Monaco’ typography as I wanted to ensure I got the correct style I wanted and so I decided to go with this final design which has ridges and textures in it from a photograph I took of the kerbs in Monaco representing the grand prix which is an important feature of Monaco.

After this I then added some text and 3 images which I took whilst on my holiday to Monaco, the text and images were of a similar style to the previous double page spread, again to build up the synergy between the two. 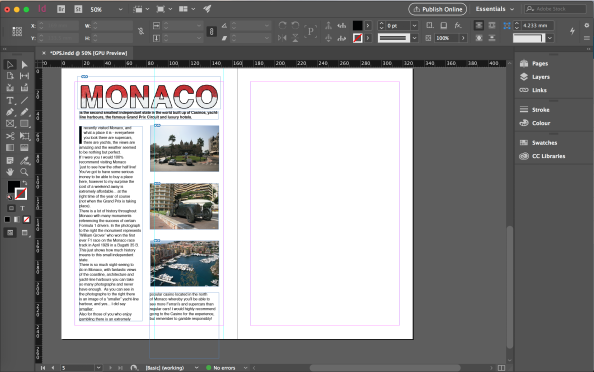 From this I then went in and added in my original image of a kerb I took in Monaco which is very boring and plain, I increased the size and rotation of the photograph to make something very clever as it works with the state of Monaco’s flag.

As you can see I just enlarged the image and played around with the rotation to get something like this which I feel is very effective as it is fitting to Monaco, and also has a slightly grungy texture to it therefore it isn’t just plain and flat. I went on to make the typography with the same effect as before in photoshop and put them into my InDesign project. I used contrasting colours to make them stand out in the red/ white areas as shown below. 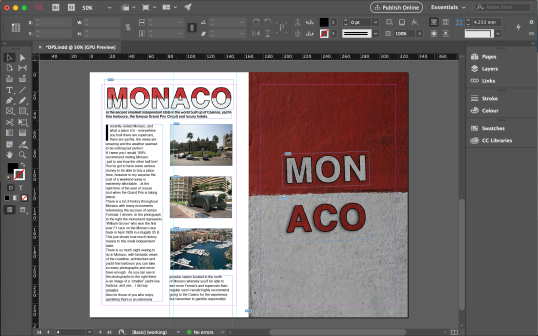 I made the line slightly off horizontal as I wanted to attract the readers eye and to make them realise that the photograph isn’t just red and white, it is in fact a kerb from the Grand prix. In order to enhance the thought of ‘Grand Prix’ I went and drew up the Monaco race circuit, I used an image of the track from the F1 website and went into illustrator to trace around it with a pen tool. Below are images of the image i used to trace and also the final image as a png file.

I then made each sector a slightly different shade by colour correcting it with the ‘hue/ saturation’ effect which worked very well. I put it into my InDesign project file with a drop shadow to make it more pronounced to the eye and I think it was a good addition.

That is my complete design process for my Monaco double page spread and below are high quality images of the final product. 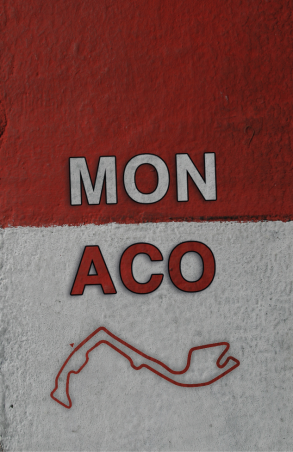